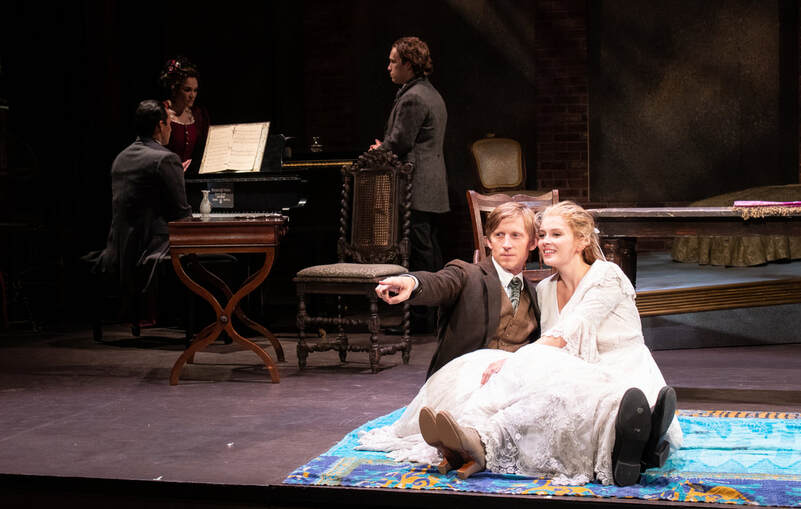 We encourage both AEA and non-Equity actors to follow the preparation and submission guidelines below.
PREPARATION
For OUR TOWN, choose one scene/monologue from the sides provided. A scene is preferred for Emily/George if possible. (Please note, anyone may choose any of the scenes.) For BEEHIVE, a a brief 60s pop song (no longer than 1 ½ minutes) that shows your voice. If you don’t have access to song accompaniment, you may choose from one of the songs provided. All roles in WHERE YOU ARE have been cast, but you may submit for replacements from the sides provided. All materials at bit.ly/Peterborough2021

Callbacks will be scheduled with individuals using Zoom.

OTHER
Rehearsals and performances will be in person. Rehearsals will take place both indoors and outdoors; performances will be outdoors. Be advised that all Actors will need to provide proof of having been fully vaccinated against Covid-19 by the first
rehearsal date in accordance with the Actors' Equity Association's “Guidelines for Vaccinated Workplaces." Equity’s contracts prohibit discrimination. Equity is committed to diversity and encourages all its employers to engage in a policy of equal employment opportunity designed to promote a positive model of inclusion. As such, Equity encourages performers of all ethnicities, gender identities, and ages, as well as performers with disabilities, to submit.

Characters:
STAGE MANAGER - (any gender, 30+) The narrator of the play, this character exists both within the narrative of Grover's Corners and outside of it, commenting on the action, directing the actors, and even taking on small roles
EMILY WEBB - (female, 18+, to play 16-19) Emily is a central character to the play, a self-assured and intelligent young person. She grows up next door to George, and eventually they marry
GEORGE GIBBS - (male, 18+, to play 16-19) George is a popular teenager and athlete, earnest and energetic. He grows up next door to Emily, his long-time crush who becomes his wife in Act 2
MR. WEBB - (male, age 30+) The editor of the Grover's Corners Sentinel and Emily and Wally's father. ROLE IS CAST
MRS. WEBB - (female, age 30+) Sensible and serious, Mrs. Webb is Emily and Wally's mother and wife to Mr. Webb. ROLE IS CAST
DR. GIBBS - (male, age 30+) Dr. Gibbs is the main doctor for Grover's Corners
MRS. GIBBS - (female, age 30+) Worrying and affectionate, Mrs. Gibbs dotes on her husband and children. ROLE IS CAST
WALLY WEBB - (18+, to play 11-14) Emily's little brother, four years her junior
REBECCA GIBBS - (18+, to play 11-14) George's younger sister, four years his junior
SIMON STIMPSON - (30+) The church organist and choirmaster, a well-known person about town who struggles with alcoholism. ROLE IS CAST
MRS. LOUELLA SOAMES - (30+) A local gossip. ROLE IS CAST
HOWIE NEWSOME - (30+) The milkman
JOE CROWELL - (18+, to play ~11) The paper boy
SI CROWELL - (18+, to play ~11) Joe's younger brother, who takes Joe's job as paper boy in Act II
SAM CRAIG - (25+) The son of Julia Gibbs' sister Carey
JOE STODDARD - (30+) The town undertaker
CONSTABLE WARREN - (30+) The town law enforcement officer
PROFESSER WILLARD - (30+) A faculty member of State University who recites facts about Grover's Corners. ROLE IS CAST

PLEASE NOTE: We encourage performers of all races and ethnicities to submit for any role.

The Peterborough Players is an Equal Opportunity Employer committed to providing employees with a safe work environment free of discrimination and harassment. We encourage applicants of any race, ethnicity, gender, sexual orientation, age, class, national origin, ability, parental status, or veteran status. We recognize that diverse teams make the strongest teams and are committed to creating an inclusive and accessible environment for all of our artists and staff.